Pat presented his first daytime show for BBC Radio 1 at just twenty years of age back in 1982. Following a year on air, plus numerous ‘Top of the Pops’ TV appearances, he then went on to host mid mornings at 95.8 Capital FM for a decade. Along the way he picked up a gold Sony Award whilst notching up 5 hit singles and raising over £300,000 for charity as part of the infamous Stock Aitken Waterman duo Pat & Mick. He then tool his mid-morning slot to #1 again at Heart London.

Over the years his radio shows have been broadcast on Radio1, Capital, Heart, Smooth and also on BFBS for our troops worldwide, along with in-flight entertainment aboard Swissair & Virgin.

On TV  Pat hosted the now cult radio rated ITV show Fun House for a decade along with other ITV shows including the Saturday morning spectacular ‘What’s Up Doc?’, ’10 Sharp’, the ‘Gala Opening of Disneyland Paris’ plus Sky One’s ‘UK Top 40’.

He won the DJ edition of ‘The Weakest Link’ raising £13K for charity. His appearance on Channel 4’s ‘The Games’ earned him great respect from viewers & fellow contestants alike. Pat also starred in ‘Celebrity Come Dine With Me’ Channel 4 ‘Never Mind the Buzzcocks’ BBC2 and ‘Who’s Doing the Dishes’ ITV. He has even had acting cameo roles in the movie ‘Superman Requiem’ and in the E4 sitcom ‘Drifters’ plus Paramount Comedy’s ‘Staff Room’.

In 2011 Pat swapped life behind the microphone for life in the jungle in Australia, as he joined ITV’s ‘I’m a Celebrity Get Me Out of Here’. Pat joined US actress Stephanie Powers, Mark Wright, Dougie from McFly and Willie Carson amongst others. After the most successful and talked about series for many years Pat emerged from the jungle after competing with Fatima Whitbread in one of the most gruelling Bush Tucker Trials ever.

Pat is also a regular contributor on Sky News, Sunrise and Good Morning Britain. He has guested no 8 out of 10 Cats Does Countdown,  The Last Leg, ITV’s fundraiser Text Santa & The Gadget Show. Pat hosts regular tv music shows on Now 70s, 80s and 90s on Sky and he appeared on Russel Howard in the BBC2 short film ‘A Gert Lush Christmas’. He’s recently made various cameo roles on Through the Keyhole with Keith Lemon and Joe Lycet’s Got Your Back.

He was support act for the Bros reunion gigs at the O2 London and he toured as warm up act for Nile Rodgers Summer gigs. He comperes and DJs at the UKs largest retro festival ‘Let’s Rock’ plus he plays yearly at the Snow bombing Festival in Australia.

On both TV & radio he has voiced commercials for Pampers, Warner Bros Cinemas, SodaStream, Rice Crispies Squares, The Daily Mail, Branston Pickle and Surf. He also hosts many live PA’s and corporate events across the UK, and plays for tourists in Mallorca, Ibiza and Austria along with his now world-famous DJ sets at retro nights in Norway, Oman and Dubai. He was the DJ of choice for Ant & Dec’s joint 40th birthday party at The Roof Gardens London.

Currently he broadcasts across the UK on Bauer Media’s National Retro Station Greatest Hits Radio along with his three weekend radio shows in Norway on P 8 Pop. 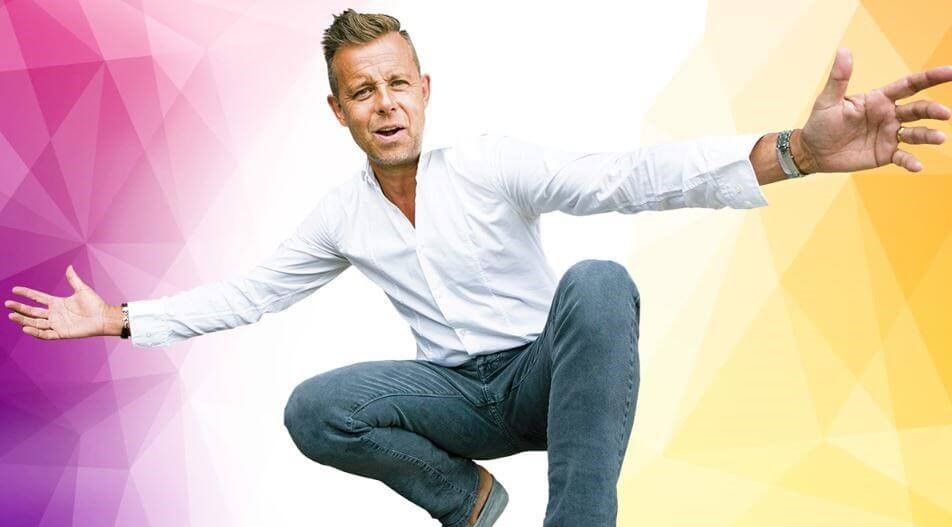